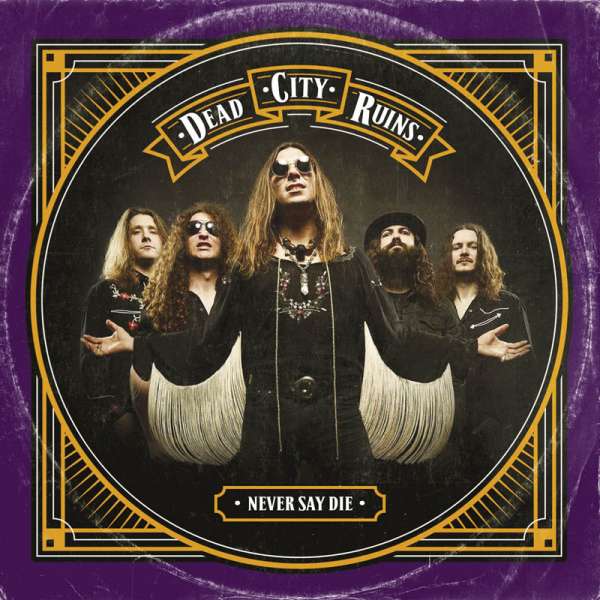 Twenty-two hours in the van, all the way from Belgium to Italy – and then this: Dead City Ruins are scheduled to play a show in Rome on a scorching hot summer day. Arriving at the venue, five guys in shorts stumble out of their rusty van, followed by empty beer cans clattering on the pavement.
The band’s singer Jake Wiffen can’t help laughing when he recalls this moment, saying: “The guys from Mastodon, who were headlining that night, looked at us as if we were totally alien. We proceeded to unload our gear, half-naked and drenched in sweat. The show is obviously the most important part of our day, but somehow word got out that we couldn’t play and that the production was running late. We were freaking out!”
He adds: “But we hung out with Mastodon, had a couple of whiskeys and joked about our shitty van, and things calmed down. We were allowed to perform, and the gig went down like a storm. We went crazy, the fans went crazy, and Mastodon high-fived us when we staggered offstage… Stuff like this only happens in rock’n’roll. Things are completely fucked up, but end up totally rad. You persevere, have a laugh – and get that rush you are looking for.“

The Masterplan
This is exactly the attitude which these five rockers from Melbourne, Australia adhere to, not only on tour, but every day of their lives. For eight years now the band has been going strong without letting anything distract them from their mission. Dead City Ruins plow ahead with everything they’ve got, and you can hear this in every note of their new album, NEVER SAY DIE. These guys play rock’n’roll as if their lives depended on it.
And in a sense, it actually does – as Jake explains; “In 2015 we sold everything we had, every single possession, bought flights to Europe and toured there for 10 months straight. That was hard, but awesome. Back in Australia, we spent all the money we made on this album. We really rolled the dice on this one. We wanted a great producer who knows what he’s doing and knows the industry of today, not from the Eighties. His job was to help us make these songs as great as they can possibly be, whatever the cost.“
They found their guy in James Lewis, an Englishman who had previously worked with Arctic Monkeys and Sunset Sons. With Lewis at the helm, the band have accomplished exactly what they set out to do.
Recorded in Melbourne, the album proudly shows all the passion which each musician put into every track: NEVER SAY DIE has power, and tons of it. It will knock you on your ass, just as all good rock’n’roll should, but there’s more to it than that. The music goes deep – as all really good rock’n’roll should. After all, Led Zeppelin are more than Whole Lotta Love, Sabbath are more than Iron Man, and Soundgarden go beyond Outshined. Dead City Ruins play with the same intensity that made the iconic albums of the Seventies, Eighties and Nineties so special. In short, it has soul.
Jake, Tommy Cain (guitar), Sean Blanchard (guitar), Matthew Berg (bass) and Nick Trajanovski (drums) went all in on this one. “We want to take this thing to the next level, and we will,” Jake says. “We have a new label, a new booking agent and new management. Everything is in place, and we’re ready, although it’s taken us two hard years to make that happen. Our goal is to go from a pub band that is fantastic live, to a stadium band that is unstoppable.”
To achieve this, Dead City Ruins are thinking far beyond their home continent. “There are some great bands in Australia,” says Jake, “but you never hear about them because there’s no industry or scene for rock’n’roll and heavy metal, as there is in Europe. Over there, you can drive six hours through three different countries and hit 10 cities. In Australia, it takes 10 hours to go from Melbourne to Sydney and another 11 to Brisbane. To get to Perth, you have to fly – and there’s nowhere to play in between! We’ve achieved a lot in Australia, but that’s not enough for us, so we’re travelling to the other end of the world to kick some serious ass.“

The nucleus of the current line-up came together in 2009, and only two years later the guys were touring Europe on two occasions, promoting their debut album Midnight Killer and travelling between gigs in their infamous van, the ‘Blue Bastard’. Asked about the legendary vehicle, Jake laughs: “After we’d played more than 50 shows in three months, our first Blue Bastard was in such bad shape that the German police kept yelling at us for driving it on the autobahn. The second Blue Bastard we left in front of a friend’s house in London, and because someone painted a huge penis on its roof, the neighbours kept complaining!”
With their second offering, Dead City Ruins, which was released in 2013, the band returned to Europe for 40 shows with Skid Row and Ugly Kid Joe. This worked out so well that Dead City Ruins were invited to join the Australian leg of the same tour in 2014.
Dave ‘Snake’ Sabo of Skid Row comments: “They’re just these young, broke kids who don’t give a fuck about anything except playing music in front of people. I love what they do, and it inspires me on a daily basis. That’s the spirit of rock’n’roll.”

The Craziness
The road soon became home to Dead City Ruins, as they went on to play hundreds of shows with bands such as Fozzy, Orange Goblin and Wolfmother. They attacked tiny clubs and bars with the same fury as they played major stages in front of several thousand ragers. “Once, we played for two bar staff somewhere in England,” Jake remembers with a chuckle. “Being on the road is fucking hard. You arrive somewhere after hours of driving, and then it turns out that the club doesn’t even have a PA, the apartment is a dog kennel in the backyard, and the three-course dinner you were hoping for is a crusty old sandwich. In situations like these, you just have to pull through and go for it. We play with everything we have, every night. We try to grab the bull by the horns and ride it as hard as we can.”

The Sound
DCR’s songs are often inspired by life on the road. Take the big, juicy rocker Dirty Water for instance; it was written in Belgium, where Dead City Ruins often crash at friends’ places and rehearse – of all places – in a pub. “We had been out for five or six months at that point,” remembers Jake. “When you’re in the middle of a long tour, it feels like there’s no way to get rid of the filth of touring, so Dirty Water talks about letting a river wash you clean.”
The bluesy Rust & Ruins took shape in Switzerland – “it’s a break-up song, when rust and ruins are all that’s left of the relationship,” says the singer, adding: “We’re not a band that constructs epic concept albums. We get together, start jamming, and our sound is our sound. If an idea is shit, we know after five minutes. If it’s good, we do it live, and if the crowd likes it, it goes on the album. We don’t have time for dead weight.“
That’s why there are no filler songs on NEVER SAY DIE – no mediocre playing-it-safe tunes and no unnecessary fluff. This album lives, grooves and rocks, and what’s more, it brings together passion and depth. A case in point is the angry Bones, which will make every head in the crowd bang but still leaves a hook in your brain that won’t go away.
In the anthemic We Are One, Jake sings about how fans get together at a show, become one, raise their fists and scream along. “Playing live feels like travelling to another dimension!” he says. “The best shows, for me, are the ones I don’t even remember. I imagine it’s what people who meditate spend their whole lives trying to find – when you get caught up in the moment, when you and 100 strangers achieve a new height of hysteria – that’s the beauty of rock’n’roll.“

Dead City Ruins aim for nothing less. This is why they roll the dice with NEVER SAY DIE, with full commitment and full steam ahead. What if it goes wrong? Jake laughs. “It always goes wrong! We just pick up the dice and roll them again. We won’t be stopped.“