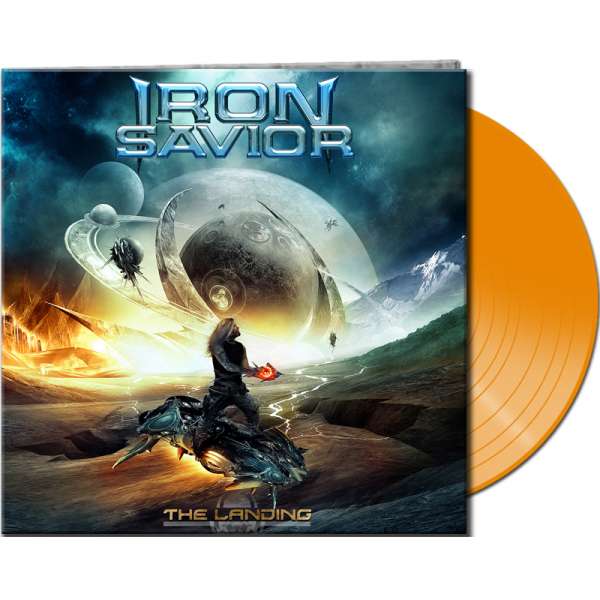 Available on vinyl for the very first time – “The Landing” comes in two different versions: Pale Blue and Clear Orange, each strictly limited to 250 units.

The history of Iron Savior began in 1996 when the band was founded by Piet Sielck, Kai Hansen (Gamma Ray) and Thomen Stauch (Blind Guardian), at first only to be a studio project. But the musical direction was clear right from the start: traditional (and influenced by NWOBHM greats such as Judas Priest and Iron Maiden) power metal with science fiction concept-linked lyrics. The rough, expressive voice of Sielck set additional accents that gave the band its own profile.
In 1997 they released their debut album ‘Iron Savior’ which was received in the scene with lots of praise and quickly established the new band. With the second album ‘Unification’ the savior made it to the top 100 of the German chart. It was followed by further studio albums in ‘Dark Assault’ (2001), ‘Condition Red’ (2003), ‘Battering Ram’ (2004) and 2007´s ‘Megatropolis’. Meanwhile, the line-up had changed. Since 2001, after the exit of Hansen, Piet Sielck remained the last of the three founding members, and he is still holding the band and their vision steadily on route.
After four years of silence the mighty Iron Savior was celebrating a triumphant return with ‘The Landing’; followed by the equally strong ‘Rise Of The Hero’ just two years later. After that, ‘Megatropolis 2.0’ (a revised version of 2007’s ‘Megatropolis’ album) was released and in the very same year (2015) also the band’s first ever Live release (DVD/CD) ‘Live At The Final Frontier’ saw the light of day. But when it comes to enthusiasm and anticipation, nothing beats the launch of an IRON SAVIOR album with all new material. The latest release ‘Titancraft’ is proof of that.