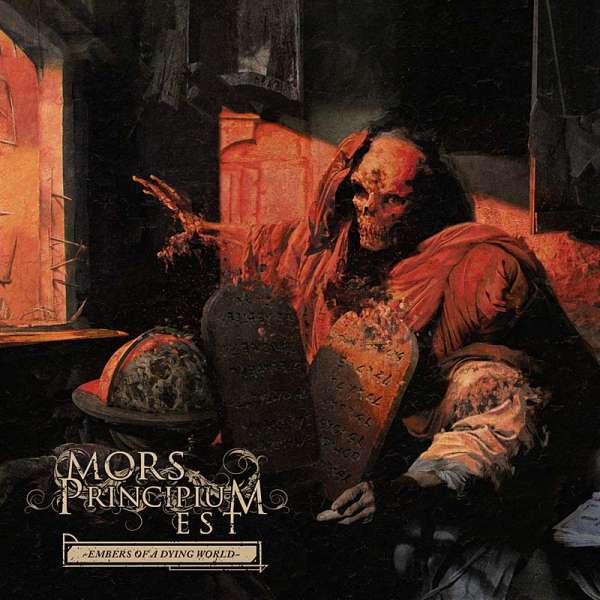 Melodic Death Metal masters MORS PRINCIPIUM EST return with their crushing sixth album, “Embers of a Dying World”, retaining their unique sound.
Taking a look at the career of MORS PRINCIPIUM EST so far shows that the band easily attracted attention with each album. Already in the days of their debut “Inhumanity” (2003) critics were full of praise for the Finns, who still sounded fresh and made no secret of their roots. Comparisons to At The Gates, In Flames, Dark Tranquillity, or even the fellow-countrymen Children Of Bodom were common, but MORS PRINCIPIUM EST have never been characterised as just a mere clone of the above mentioned. Even when the follow-up albums “The Unborn” (2005) and “Liberation=Termination” (2007) were released, the names of the scene pioneers were always at hand, but rather to show that this upcoming band is on a par with them. This positive response from the press helped to build a loyal fan base and establish the band internationally.
Since 2007, the band had to deal with several line-up changes, which almost lead to their disbanding, ultimately falling into a long hiatus. However, Ville, Teemu and Mikko were determined to carry on the MPE legacy and led an online campaign to search for a new composer/guitarist. In 2011, Andy Gillion from United Kingdom answered the call and became the new songwriter/lead guitarist from over 200 applicants. Six months later, Andhe Chandler from New Zealand joined as a second guitarist. With this new line-up, "...and Death Said Live” was recorded and released in 2012 – a bold statement that the band was not finished yet.

Line-up changes being no stranger to the band, in 2014, Andhe Chandler left and was replaced by Kevin Verlay. By this time, the band’s fifth album was almost complete and at the end of 2014, “Dawn of the 5th Era” was released.
After several months of touring since the new album’s release, Kevin decided to leave the band due to personal reasons.
However, Andy had already written some new material and the basis for a new album was beginning to form. In 2016, the band began to record their sixth album to be mixed and mastered by Thomas “Plec” Johansson” at Panic Room Studios in Sweden.
Now in 2017, MORS PRINCIPIUM EST return more impressive than ever with their latest masterpiece, “Embers of a Dying World”.
The Cover Artwork is painted by artist Eliran Kantor (Testament, Iced Earth, Sodom).