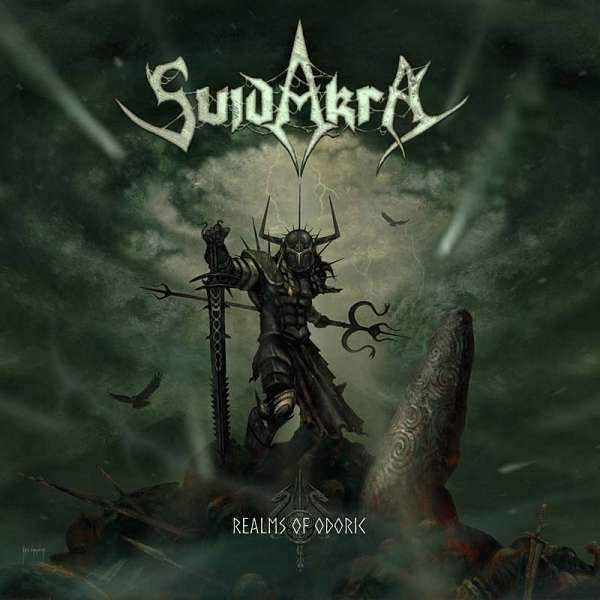 Suidakra will release their 12th studio album „Realms Of Odoric“ three years after their last output, on May 20th.
The band wasn’t lazy in the last three years though, they played Heidenfest, did a US tour together with Overkill, toured in Brasil and managed to go on a headliner tour in India which was documented by German culture TV station ZDF Aspekte.

The 13 songs on „Realms Of Odoric“ mark the longest album in band history so far and for the first time the concept is not based on historical facts. Actually it is a made-up fantasy world, created by Kris Verwimp, which led to an artistic collaboration with Suidakra singer Arkadius Antoni three years ago already. The result back then was the artwork/soundtrack project of the same name (“Realms Of Odoric”) and was more about the actual happenings in the fantasy world but not particularly about the characters.
This time the Suidakra release „Realms Of Odoric” highlights the characters, their personalities, feelings and thoughts.

Therefor many of the former musical themes from the soundtrack project are now transposed in a heavy, bombastic Metal frame where Melodic Death Metal is mixed with traditional Heavy Metal and Celtic Folk elements.
The extensive and epic artwork was designed by – of course – Kris Verwimp.

1. Into The Realm
2. The Serpent Within
3. The Hunter's Horde
4. Creeping Blood
5. Undaunted
6. Lion Of Dracania
7. Pictish Pride
8. On Roads To Ruin
9. Dark Revelations
10. Braving The End
11. One Against The Tide
12. Cimbric Requiem
Bonustrack
13. Remembrance