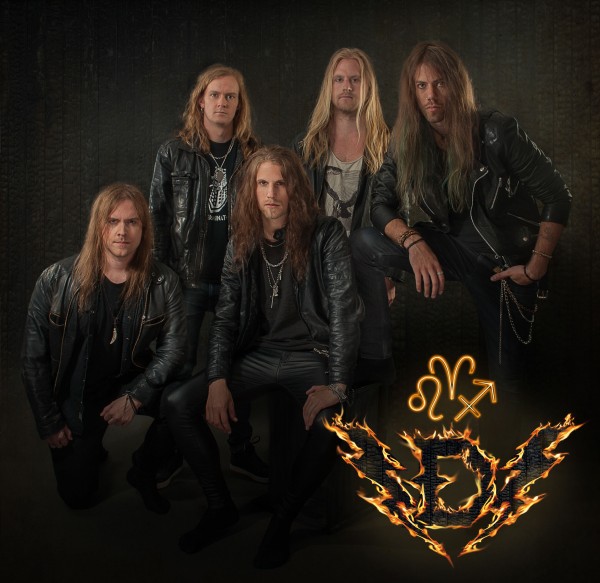 We have talked with a young but really prominent band from Sweden DYNAZTY recently signed to AFM. The sixth studio effort of DYNAZTY called “Firesign” is yet to come on September 28th and the guys answered some questions about this work and the band.

Could you tell about the name of the band, Dynazty? What does it mean for you?

Nils Molin (the singer): When the band was created we were simply looking for something short and powerful. Maybe today it means us creating a long-lasting legacy for generations to come, haha!

“Firesign” album has quite symbolic cover. Could you explain your idea behind it? It reminds something like ancient Egypt culture symbols. How does it refer to the title and the whole idea of the album?

Nils: Our idea was simply to give artist Gustavo Sazes free hands with the cover art. We provided him with all the lyrics from the album, as well as explaining the themes of the songs and particularly the title track. It turned into a fantastic artwork in my eyes.

Could you tell us about the songwriting process in the band? I guess it’s Nils who is responsible for the lyrics? And how do you compose music? Where do you get your inspiration? Was the songwriting for this album different comparing with previous 5 records?

Nils: The bulk of the songs are written by me and Love, with Mikael being heavily involved in 4 of the tracks, and Jonathan providing one song as well. The writing process has more or less stayed the same throughout our last three albums. We demo and write at the same time. Changing and perfecting the songs as we go along. The difference this time around, besides finding new kind of influences and ideas for arrangements, was that the writing process went so smooth and surprisingly fast. Inspiration flowed like never before. Besides co-writing the lyrics with Jonathan on The Light Inside The Tunnel, all of the lyrics come from me. As far as writing emotional lyrics, I simply try to write something that presents the track in the best possible way. Whether it’s a more dark matter or a more lighthearted tone, I draw inspiration from my own experiences, others’ experiences or simply write from a fictional view point.

You produced “Renatus” yourselves but decided to work with Peter Tagtgren on the subsequent release. Was it easy for you to produce your own music and did you like that experience? You recorded the new one with Thomas "Plec" Johansson but still kept Peter for doing mix, why? How do you work with the producers?

Nils: We have a great working relation with Peter, working with him since way back in 2011. Most of the mix of FIRESIGN was done by his friend and colleague Jonas Kjellgren with whom we also worked before on numerous occasions. When it comes to setting the sound we are very specific with what we want and what we are looking for. While at the same time we know from experience that guys like Jonas and Peter will deliver what we are after. Thomas Plec Johansson handled all the recordings, and I have to say it was our most smooth, fast and fun recording we’ve ever done. He is simply a brilliant engineer and one absolutely awesome dude!

We can’t avoid a question about style changes... The first 3 albums of Dynazty were recorded in the vein of classic hard rock, AOR but with “Renatus” suddenly you changed to a kind of progressive riff-oriented modern power metal. What was the reason to change that time? Did you have any doubts doing that?

Nils: The reason for the change was simply that we were very tired of the restrictions and limitations that a fixed retro genre has, as well as being tired of that genre in general. We wanted to find something that was more true to our current musical influences and a genre where we could be more experimental and diverse. We expected a fan backlash, but in reality it never really came. Surprisingly a lot of old fans were enthusiastic about us exploring new territory. Nowadays we are most known for our recent albums. The change paid off and we are very happy with the musical freedom that we now have.

It seems this time with “Firesign” you’re a bit less heavy, it’s still not hard rock anymore but something like melodic metal. How would you describe you current style? Have you ever thought about commercial success changing the style? Did labels influence on such kind of decisions in any way?

Nils: I would describe our current style as melodic modern metal. As far as changes in our sound goes, we have always just followed our hearts. There’s really no pre-conceived idea of reaching more success or whatever. We simply write the music that we feel inspired to write at that particular time. Record labels unfortunately had some influences on our musical direction in the very early years of our career, but nowadays we choose to work with people who trust our abilities and understand that the band is better when left alone to fully pursue our vision.

Was it hard to adapt your older stuff to the new style to make it sound “consolidated” live? Which songs from the first two albums you still play during live shows?

Nils: Slightly hard. Raise Your Hands from the “Sultans Of Sin” album is a regular in our live set, even to this day. We also very often play This Is My Life. But that's about it as far as old material goes. We now will have three albums to play from, that represent who we are today.

Nils described the new album as the “most creative, dynamic and inspired album yet. Simply our strongest effort so far!”. I’m sure it’s  totally true! But usually all the musicians say something like this and no one tells that his new album is worse than the previous one ;) So, did you try to write something nice for the press release or are you so excited with the new stuff that couldn’t resist expressing your feeling in this way?

Nils: Yes, all musicians say this. Yet you can’t really say anything else if you believe it, can you? And in our case the whole band feels that this is our strongest effort. Therefore it’s in the press release.

Nils, you’re a permanent member in Amaranthe since last year, right? Is there any risk that Amaranthе will affect Dynazty?

Nils: On the contrary I believe that Dynazty actually gets more exposure by me also being in Amaranthe. Dynazty is in my opinion one of the most underrated bands on the whole metal scene, and I think that this band deserves all the recognition in the word. As far as time goes, I’m not exactly the only person who’s in more than one band nowadays. I have time and I have energy in abundance. No problem to give my all to Dynazty.

You have released 5 albums already and you’re close to release the 6th one, and all over your history the band passed only a few line-up changes. How do you succeed to keep healthy environment in the band? Do you keep in touch with each other in “normal” life?

Mike Lavér, the guitarist: Yeah, we’re all good friends and we all hang out in our spare time as well. Some of us are childhood friends, me and Love have actually been friends since 6th grade. Maybe we’re lucky that we all get along and share the same humour, since we’ve spent so much time together on the road and in the studio. Almost like a family :)

There are plenty of awesome rock and metal bands in Sweden. Do you have a clue why is that? What do you think about Sabaton? Did they make any influence on your sound or songwriting?

Mike: It’s dark and cold here. So there’s nothing else to do than to play music :)
We toured with Sabaton in 2012, I think it was the Carolus Rex tour. Great guys! I don’t think they have inspired our sound or songwriting. But they really inspired us with their live act. Their show was amazing every single night. So we had to step up :)

The band used to play with Dragonforce, W.A.S.P., Joe Lynn Turner and Pain – very diverse range of bands and artists. What are your best memories about all of them?

Jonathan Olsson, the bass player: It’s always fun to meet and hang out with new people and musicians. Most of them are nice. We have a lot of good memories with them, except Blackie Lawless (W.A.S.P.). He treated us like garbage. He even kicked us out from the tour for eating from the catering before him. For some reason we got to stay but we lost sound check, catering access and we had to leave backstage right after our show so Blackie wouldn’t see us. The list goes on… We’ve heard worse stories from other support bands and people in the business. One of the best things to play in Dynazty is whatever happens, great things or shit situations, we laugh at it :-)

Have you ever experienced a rock star moments like being welcomed by fascinated fans at airports or being chased by fans, throwing things out a window etc.?

Jonathan: Yeah. I’ve thrown things out the window haha! (don’t do that kids!) The most energetic fans I’ve met are in Japan, China and Russia. I’ve never been running from fans but sometimes the tour manager has to help getting you out of there because of time schedule stuff. A couple of stalkers over the years, but these days they use the internet so I have to cyber run/hide from them ;-)

Within only 10 years Dynazty recorded six albums, the band has worked with respected records labels and it means that it succeeded to build quite a good career in music which is not easy. What could you advise to young bands that just start their careers? Does it worth to make music? Is it possible to live by music nowadays?

Mike: Don’t wait for things to happen. Try to do as much as you can by yourselves; write, produce, book a studio, record an album and get out on the road.
It’s a cliché … But; if you work hard, good things will happen.

Dynazty has recently signed with AFM Records. What is the best part in this collaboration?

Nils: The best part is that we are now working with a label that fully understands what kind of a band we are and how we should be presented to the world, as well as having the right contacts for an act like ours. Once we got into discussions with AFM we decided quite fast that this should be our home.