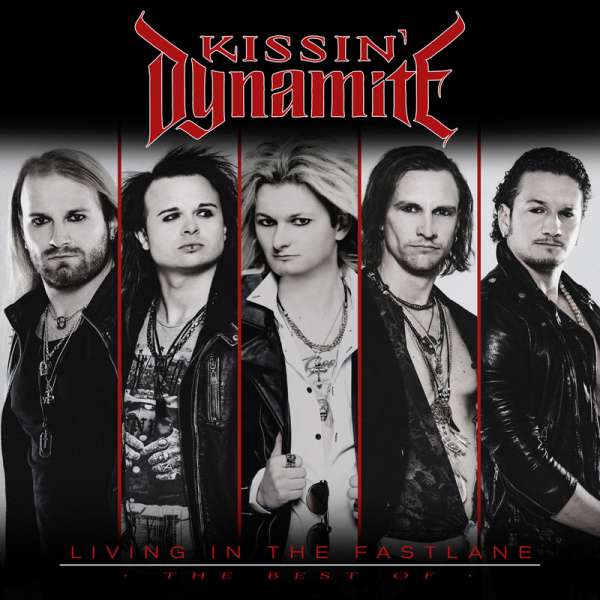 Best Of album by Germany’s Rock sensation KISSIN' DYNAMITE with a song selection that spans all their albums up to this date, for old and new fans and that includes several rare Japan tracks and previously unreleased material!

Living In The Fastlane – This motto, taken from the “Generation Goodbye” album pretty much sums up the success story that is KISSIN’ DYNAMITE. Landing a major deal right off the bat with the debut album “Steel Of Swabia”, the band accelerated from 0 to lightspeed – no wonder they quickly scored high-profile live slots like the Bang Your Head festival, or supporting Heavy Metal legend U.D.O. on a Europe tour; never shy of making clear to their exponentially growing fanbase and the rest of the world that the are a force to be reckoned with – and surely here to stay.
In 2021, nearly 20 years after the band’s inception under a different name, “Living In The Fastlane – The Best Of KISSIN’ DYNAMITE” provides a wholesome retrospective to their discography so far, from the beginnings on “Steel Of Swabia” through milestone albums like “Money, Sex & Power” and “Generation Goodbye” to their latest output “Ecstasy”. A diverse and carefully curated selection containing every facet of the Rock Chameleon KISSIN’ DYNAMITE - fist-in-the-air hits, live versions, Japan bonuses and in this form previously unreleased material from their whole discography - invites the sworn fan to join an emotional adrenaline road trip on the nostalgia (fast)lane, but will also thrill and convert even the very last listener that hasn’t been a KISSIN’ DYNAMITE fan up to now.
Join us on a high-speed trip on the Fastlane!