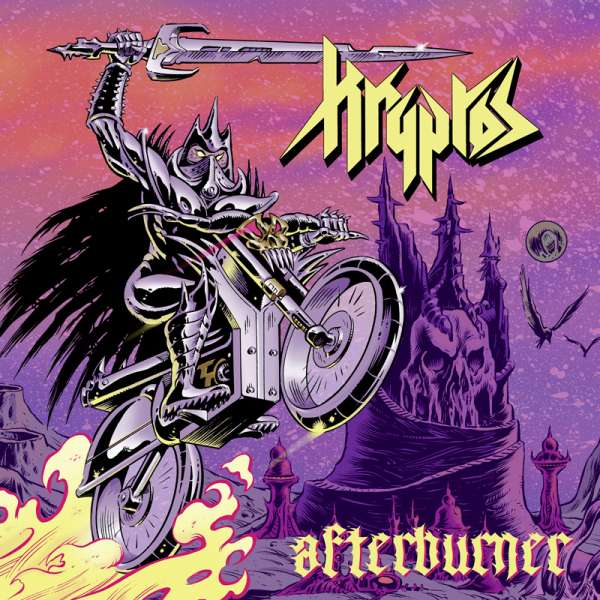 The Indian true school metallers Kryptos are back delivering sharp agressive riffs, biting vocals, bringing heavy metal from the underground of India into the game. „Afterburner“ is relentless, grim and oozing with spikes and leather
Since 1998, when KRYPTOS was formed in Bangalore, India the four-piece is a synonym for hotshot old school heavy metal with a thrashing twist. As the first Indian band ever touring Europe they earned themselves a reputation as a fiery and exciting live act, which they consolidate with their performance at the Wacken Open Air in 2013, once more as the leadoff band beyond the Indian ocean and supporting DEATH ANGEL, TESTAMENT or IRON MAIDEN. The band returned to Europe with SACRED REICH and made a second appearance at W.O.A. in 2017.
The first three albums "Spiral Ascent" (2004), "The Ark Of Gemini" (2008) and "The Coils Of Apollyon" (2012) were highly acclaimed by press but kept under the radar of the masses, until their 2016 Killeralbum "Burn Up The Night" changed KRYPTOS´ Dark Horse status. The band received praise from all quarters for recapturing the magic of the 80’s, influenced by bands like ACCEPT, JUDAS PRIEST or KREATOR, still remaining true to their underground roots, shaping their very own KRYPTOS style, somewhere between massive Heavy Metal and precise high-speed thrashing.
So what could be more obvious in 2019, due the band´s twenty-year anniversary, than that the spearhead of the Indian Metal Revolution release their ferocious fifth album “Afterburner”, featuring razor sharp riffs, screaming solos and a raging twin guitar attack, proudly following the best traditions, flooring the gas pedal and putting Indian Metal on the map once and for all?! As with the previous albums Anupam Roy again is responsible for mix and mastering, for the cover design KRYPTOS could win Bill Hauser, who also designed the crazy artworks of HIRAX and SKELETONWITCH. Currently signed to Seaside Touring for bookings in Europe and endorsed by Gibson Guitars, KRYPTOS will hit European shores once again in the summer of 2019 to bring their blistering brand of 80’s inspired heavy metal to the masses.