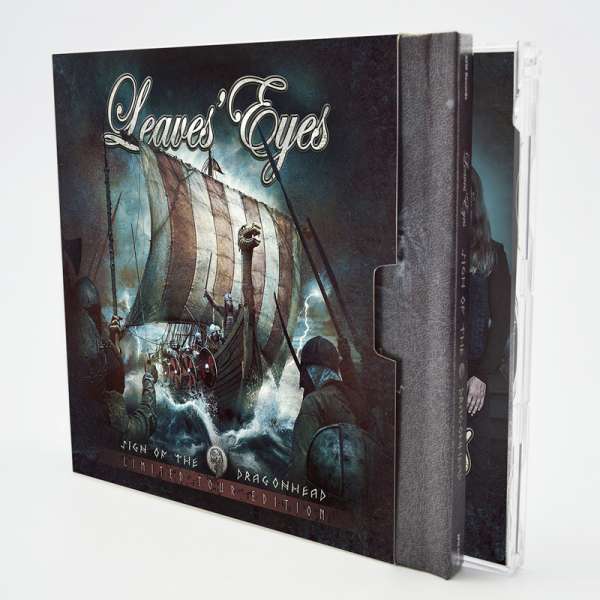 The Viking sails have been set – 2018 is still under the sign of the dragonhead.
Uncompromising, combative, epic – the new LEAVES’ EYES!
Right on time for the upcoming tour with Kamelot a special tour edition will be released. It includes the SIGN OF THE DRAGONHEAD album as digibook version and the brandnew 3-track single RIDERS ON THE WIND which includes two
previously unreleased tracks.
April 2016 saw Finnish vocalist Elina Siirala succeed Liv Kristine at the longship’s helm. Her impressive live premiere in front of more than 20,000 metal heads at the Hammersonic in Jakarta / Indonesia, subsequent festival appearances (headlining shows at the Metal Female Voices, Wave Gotik Treffen, Masters of Symphonic Metal, Full Metal Cruise, among others) and tours through Europe, the US and Canada established Elina as a charismatic frontwoman with a powerful voice, immediately sparking euphoria among Leaves’ Eyes’ fans. Following the ‘Fires In The North’ EP, which sold out immediately, ‘Sign Of The Dragonhead’ will be the first full album featuring the new line-up. Leaves‘ Eyes sound more direct, powerful and unique than ever before. ‘Sign Of The Dragonhead’ plays in the premier league of music and, thanks to a new exceptional vocalist and the band’s tried-and-tested fortes, is set to leave an unforgettable mark in the success story of this group, hinting at new feats at the horizon. Full speed ahead!


- Now a special tour edition will be released. It includes the SIGN OF THE DRAGONHEAD album as digibook version (2-CD) and the brandnew 3-track CD-single RIDERS ON THE WIND which includes two previously unreleased tracks:
-> ACROSS THE SEA - acoustic version
-> JOMSBORG - acoustic version
- LEAVES' EYES are counted among the most successful bands in the symphonic metal genre
- On tour with KAMELOT from September until November 2018
- In April 2016 Finnish vocalist Elina Siirala took over the singer position in LEAVES' EYES and was establised quickly as a charismatic frontwoman with a powerful voice
- LEAVES' EYES successfully toured North America with Sabaton recently and were headlining some of Europe's most prestigious festivals (a.o. Wave Gotik Treffen and Metal Female Voices)
- new Videoclip for "Riders On The Wind" available upfront release